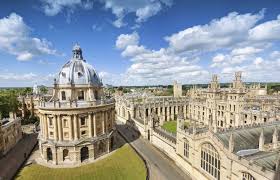 Using 360 video for venues is a wonderful way to communicate the space of the venue, potential table layouts, what seating arrangements there might be and what the lighting is like. Recently, we did a short series of 360 videos for The Bodleian Library of Oxford University. It’s ordinarily used during the day for tour groups looking at the intricate ceiling and walls. In the evenings, it can be used for events like corporate dinners and conferences. At weekends it can double up as a wedding venue. It is a truly impressive building due to it’s history and it’s ornate architecture.

For marketing purposes, potential Bodleian clients are curious how the room could be laid out. A still image can only do so much and the depth of the room is dependent on the lens. The wider the lens, the more distorted it becomes e.g. a fish eye lens. A 360 video on the other hand can give you a much better sense of the depth of the room and what can and can’t be done with regards to tables, quantity of people, furnishings and the like. It’s for this purpose that the Bodleian plan to use the videos to show clients around the building without the potential clients necessarily turning up initially, saving time and money.

On a desktop, the videos can be moved around using the mouse. On tablets and mobiles, the image can either be moved using fingers or by moving the tablet itself. For pure immersion, the video can be viewed using a VR headset like an Oculus or a HTC Vive. At this stage, one can get the sense of the venue without entering the world of VR and unless filmed at a very high bit rate and over 4K, VR would look quite pixelated.

What’s next- an AR app for the Bodleian. Case study coming soon!