Why and when to film interviews 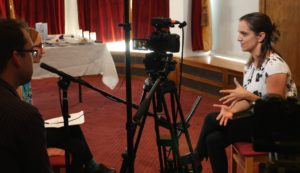 Not many people like watching talking heads unless they are interested in the person, the person is extremely interesting and/or it’s for a very short period of time. Most people switch off if it’s a marketing related interview as everyone knows its been edited and engineered. So, when and if should you film an interview?

Interviews are useful if:

1- You use the talking head shot for approx. 5s and then cut away to other shots. In effect, the interviewee becomes a voice over. That way, you can cut the voice over audio any which way you want as well. Shorten it, add in bits from earlier or later in the interview etc. assuming that you have collated some additional shots (ordinarily called b-roll). This way, you get all the information that you want as well in the audio which can be useful for edits.

2- You want short snippets for social media. In which case, get longer takes and social media takes or soundbites. Soundbites for social should be under a minute ideally. The viewer can always click on a link if they want to see the full answer or a longer edit with b-roll.

3- If it’s for internal use and you have a captive audience, then you can pretty much do what you want! It’s not ideal to bore your audience to sleep but at your discretion. We’ve filmed long peices which are uncut and go on for 2 hours. They were tax lectures and the company we did it for were routinely sold out.

Interviews generally form the skeleton of the edit if you like. They can be the structure (edited or not) onto which everything else hangs. They are definitley useful to get. What you do with it afterwards in the edit is the important step to engage or disengage the audience.

Why and when to film interviews